I say "portable" because for a portable player it is really big and really heavy. It included a 3 channel tube amp and drove a pair of satellite speakers which tucked neatly inside when not in use, and a center channel woofer permanently mounted in the cabinet. It didn't come with the satellite speakers, though I know where they are and can procure them if need be. I had other plans though.

I rewired the amp, removing the filter circuit that fed the satellites a bass-less mix and bypassed the internal center bass channel completely so that I could feed a full-range stereo signal to a pair of mid 70s Kenwood KL-777Z speakers that have been taking up room in my garage for at least a decade and a half. You can see one of them in one of these shots.

The tube amp is relatively low watt, comprised of only two 6AQ5 power tubes, a 12AX7 preamp tube, and a 6X4 rectifier delivering, I would estimate, 10 watts total. But believe me when I tell you that this is more than enough to fill our mid-century split-level with tunes. I guess 6AQ5s where the tube dujour of 1963-64 as I have a 1964 Gibson Scout guitar amplifier that has almost the exact tube layout but is wired mono and uses a different rectifier.

Since it was originally a portable unit I had to build the stand. It's a design of my own but it does borrow heavily from a few mid-century Danish designs. This stand is very versatile and Amy has already requested that I build two more to serve as night-stand bases for our bedroom. If that experiment goes well you will definitely be seeing these bases available in the Atom 11 Studios store. 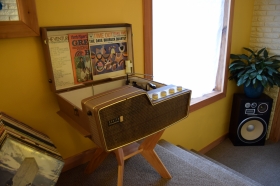 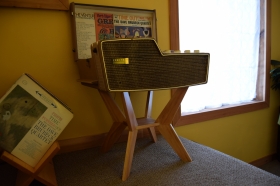 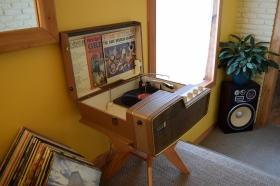 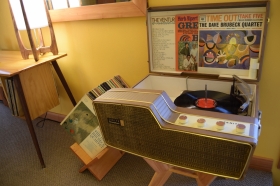 Use that form to talk to us.
➧
Or, if you're old-school, click here.